So, thanks to this #stayathome thing the world is going through now, I finally had the time to finish recording a brand new demo! This one is about an effect pedal I’ve had for several years already, but had no time (and was also too lazy) to get to know it better. I have been using it in some concerts, but mostly with only one of the various functions it has, what a pity, oh, shame on me. My overall conclusion is that this thing is very good for certain styles of music, you can definitely do a lot of interesting things with it, if you are ready to spend the time and your imagination is developed enough. But hey, let’s start from the beginning!

The connections are easy – you just plug in your mike with a regular xlr cable, the output is the same. If you need some phantom power – no problem, this option is available. Also you can (and should) connect an instrument, like piano or guitar, something that feeds harmonies to the BOX, we’ll get to that in time. You need electricity connection for it, it doesn’t work with batteries. But do not fret, the adapter is included.

Once you’re plugged in and ready to roll, you can adjust the gain of your microphone, in other words – you can set up the sensitivity of it from low to high. And then the fun begins!

Let’s start with the effect section! There are 7 types of harmonies – simple octaves, low harmony (everything that is below your original pitch), high harmony (everything that’s above your original pitch), a simple combination of both and 3 different Multi harmony options, which is basically a bunch of different voice combinations. Then there’s an exciting option of the whistle (that is the one I’ve used multiple times, like HERE) and IMHO the most amazing thing there is in this BOX is the vocoder. I was extremely excited about this one specifically, it was the main reason why I decided to get the BOX (read: whine to my husband to get me one). You see, most of the vocoders available are a) expensive, b) come with a keyboard and a pretty bad microphone (which isn’t a bad thing, because no one’s going to hear your original voice while «vocoding») c) give you an option to do just that – to «vocode», and that means you’d need two setups – one for the vocoder, another one for everything else. That wasn’t what I wanted, so the VOICE BOX was a gift from above.

Why I do like the «vocoder» in the BOX. 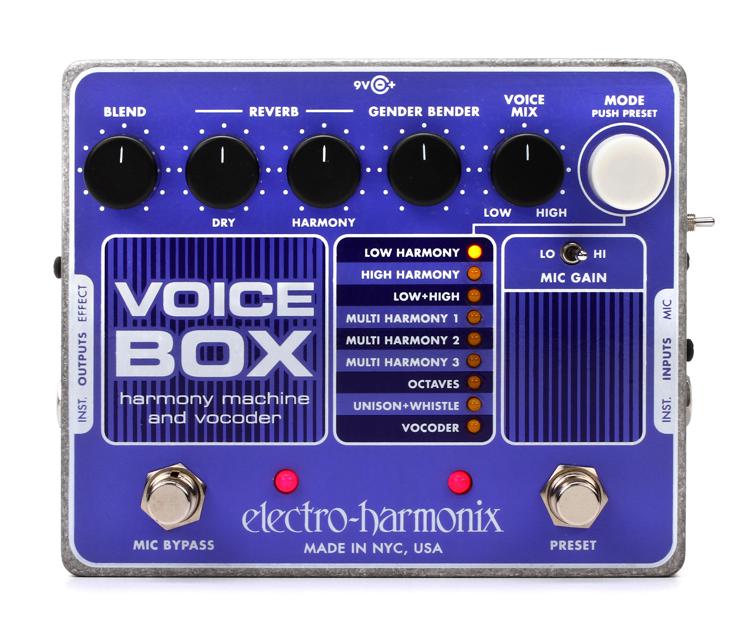 Let’s take a look at the upper part of the BOX, that is how you adjust the sound and a lot of other things the BOX does, so:

BLEND: this is basically a knob that helps you to control the balance between the original voice (or, how the professional guys call it – dry) and processed (wet), in this case – harmonized. You can turn off harmonies completely, or you can mute your voice completely as well

REVERB: you can adjust separately the reverb you apply on the dry voice and the harmony

GENDER BENDER: this one is interesting. Basically it’s a thing, that controls whether your harmony sounds more feminine or more masculine, not very hard to guess from the name, right? But since it’s not a real voice, but a processed one, it doesn’t sound very realistic, when you use it on some effects, that don’t have a lot of voices, like the LOW and HIGH harmonies, especially if you adjust the volume of the voices to «high» (with the blend button), because it isn’t a real voice, it’s a duplicate of your own, which is first changed in pitch, then slowed down or sped up accordingly, and then some other type of magic happens to correct any errors that may occur on previous stages of sound editing. I’m not a tech person, so  the thing makes my knees shake if I think of it too hard. BTW, changing the gender of the voice seems to be a very exclusive and expensive thing if you want it to sound realistic, and the good one is usually found as a preset sold to accompany sound editing programs, rather than being a part of a hardware thing. Doesn’t mean it’s not interesting in such a setup as this, it just sounds completely different in comparison to the «real thing».

On the other hand, when you use it on effects, that have multiple voices (Like MULTI HARMONY 1,2, & 3), it sounds quite good and comes in pretty handy, helps in making the sound of the harmony compliment the original voice. So, as in all things in life, GENDER BENDER has both good and bad qualities :)

VOICE MIX: this is a thing that helps you in choosing the set of harmonies that the effect produces – how many different types will be above and how many below. In LOW HARMONY if you turn the knob to minimum (7 o’clock), it leaves only one voice below the original, the lowest of the available. Same will happen if you turn it to maximum (5 o’clock), it will only «play» the highest of available voice choices. But that is if you are in Harmony modes, when you’re in the UNISON+WHISTLE the maximum will leave only the whistle, the minimum vill leave only the unison, if it’s set to the middle setting, you’ll have both in equal amount.

All in all it depends on your taste, you can adjust all 5 black knobs however you like and choose the best solution for you.

In addition to that, you can save up to 9 presets – basically you can program 9 different variations of the 5 knobs and store them for as long as you need, info on how to do that is found int he users manual and is pretty easy.

The BOX can be used as a floor pedal or with hands, so you can choose the most convenient way. Thanks to the presets you can save in advance, all you need to do is plug everything in and leave it on the floor, the preset button looks as if it was made for boots.

Oh, and there is a MIC BYPASS button, that will leave only the dry voice.

Now about my own experiences with the BOX. 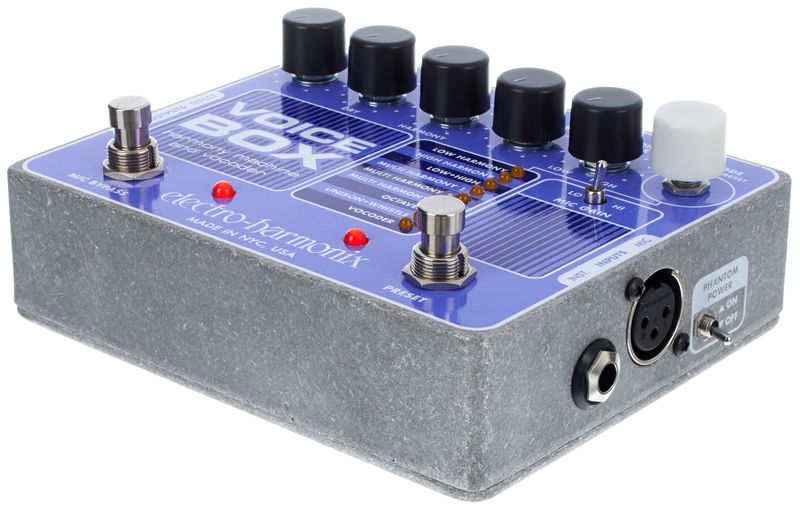 Previously I have used the only 2 presets that are possible to use without a harmonic instrument plugged in – UNISON+WHISTLE and OCTAVES. It looks like a silly way to use the effect that is meant to be a harmony tool, but my laziness won and I decided to get back to the BOX and study it later. Now that I have, it took me four days to record this demo, because of several things I’ve encountered on the way. Here’s how the story goes.

First I made a backing track, because I don’t play any guitar at all and don’t play piano on a level that would allow me to perform publicly. So, backing track it was. Oh, and the backing track consists from a simple loop available in Garage Band and some bass and strings I recorded on top of that. Then I plugged in a mic and tried experimenting with different things. Here are some of my conclusions:

So, about the simplicity. When you’re in the VOCODER  mode it doesn’t really matter what notes you sing; in fact, you don’t have to sing at all, you can simply talk. The principle of how the vocoder works is easy – it «takes» your speech and assigns the tone/sound from the instrument you have plugged in. Basically, you can play whatever you want and it will sound good. Things get more complicated when you get to the harmony effects, because technically it works slightly different from the Vocoder.

I already described how the pitch shifter works in my previous blog entries, so in simple terms it goes like that: you feed the BOX some info, like harmony that you play on the piano; the BOX recognizes the key, let’s say you’ve played C major triad, so the BOX knows, you’re in C major key; you feed the BOX another portion of info – your voice, and that’s where the magic begins. Let’s say you’ve chosen the HIGH HARMONY preset and turned the VOICE MIX knob to maximum, so that it gives you only one voice over yours, the highest available, it means that the BOX will give you the 5th above your original note. It will take your own voice, duplicate it and will drag the shift 5 steps up from the original voice. Sounds nice in theory, but in real life it just means that the BOX knows it has to play the 5th interval over your and that this interval should consider the C major scale as a condition. But… sometimes 5th doesn’t sound good with everything else, and the BOX will not adjust it to make it sound better, because it’s not alive, it doesn’t hear things like people do, it operates mathematically, and almighty math says that 5th is good. That is why you have to take it into consideration when constructing the melody. I had to change the melody in several places, because it just didn’t work.

Also, the users manual doesn’t say how «clever» the box is, so after experimenting for a while I came to the conclusion, that it doesn’t recognize complicated chords. I tried different chords, but the only ones that did work were simple major or minor triads. If you add a #4, or a b7, or a mb5, it will not work. Sure, pop music, or country music, or something else, they don’t really use «jazzy» chords, and I’m not sure how complicated it would be to make the BOX tolerate such chords, but anyway, you can still do a lot of beautiful things even with simple triads.

All in all I’d say it’s a mighty fine specimen for a harmonizer. Sure, you have to get used to it and find the best ways to make it work, but what effect unit doesn’t require work? They all do, don’t believe anyone who stated otherwise. You need to find what suits you best, what works with your voice and your music. In the end it all depends on how creative you can get!

Oh, and if you’d rather watch a video instead of reading a lot of words, here’s a review I made about the effect, my first one! Cheers!